The Versailles Municipal Library, listed for the historical importance of its collections, extends over nine sites: the Central Library, which holds most of the historical collection, the Heure Joyeuse Library, founded in 1935 and dedicated to children’s literature, the Digital Atelier, the library of the Open University of Versailles (UOV), and five neighbourhood libraries: Porchefontaine, Prés-aux-Bois, Petits-Bois, Saint-Louis and Vauban.
The Central Library is located in the former Foreign and Maritime Affairs building, built in 1761-1762 at the instigation of Choiseul and to the designs of Jean-Baptiste Berthier. The Gallery of Foreign Affairs, the building’s ceremonial area, listed as a historic monument in 1929, was a centre of French diplomacy until the Revolution. It was here that the 1783 Treaties of Versailles were negotiated, granting independence to the United States of America. Today it houses 55,000 antiquarian books and offers visitors the chance to explore a series of five rooms with admirably preserved interiors and artworks, including a portrait of Louis XV by Louis-Michel Loo, overdoors by Louis-Nicolas Van Blarenberghe and his workshop, and a group of paintings by Jean-Jacques Bachelier.
In addition to its public collections, the library has considerable holdings of historical and local importance: from cuneiform tablets to 21st-century artists' books, these include around 2,700 manuscripts, 120,000 printed books, 8,000 prints, as well as important collections of coins and medals, photographs, drawings, paintings, sculptures and objects, either from Revolutionary confiscations or acquired later through donations, bequests or acquisitions. Among the library's remarkable holdings are the manuscripts of Madame de Maintenon, part of Marie-Antoinette's and Madame du Barry’s libraries, the Goujet collection of rare 16th-century poetry and literature, incunabula, livres de fêtes, manuscript and printed music, and numerous books of royal or princely provenance.
Activities are offered on a regular basis across the library network to promote public engagement and showcase the historical collections, accessible online since 2021 thanks to the digital heritage library "La Sirène".
Bibliothèque municipale de Versailles
5 rue de l’Indépendance américaine - 78000 Versailles
bibliotheque@versailles.fr 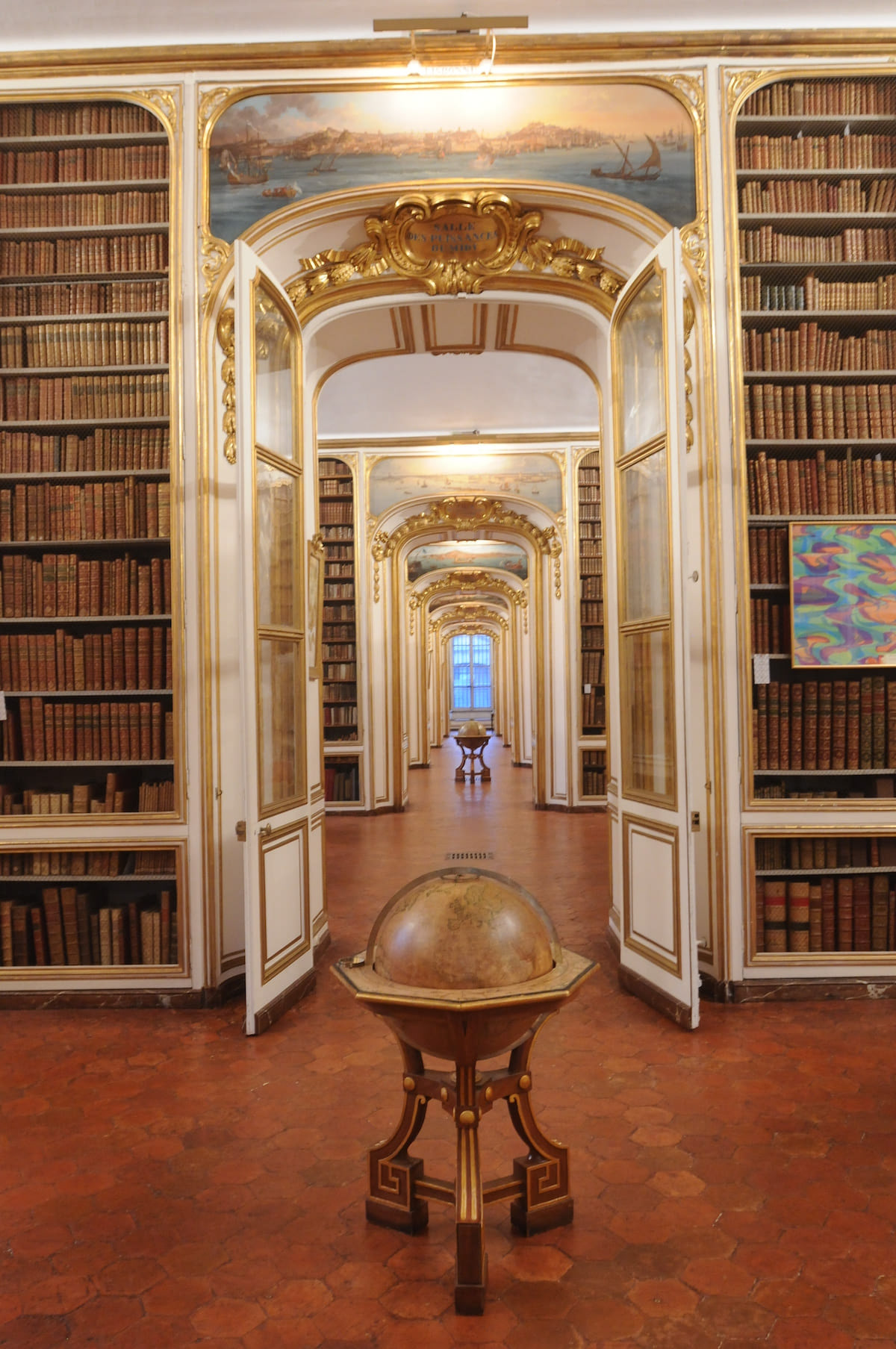 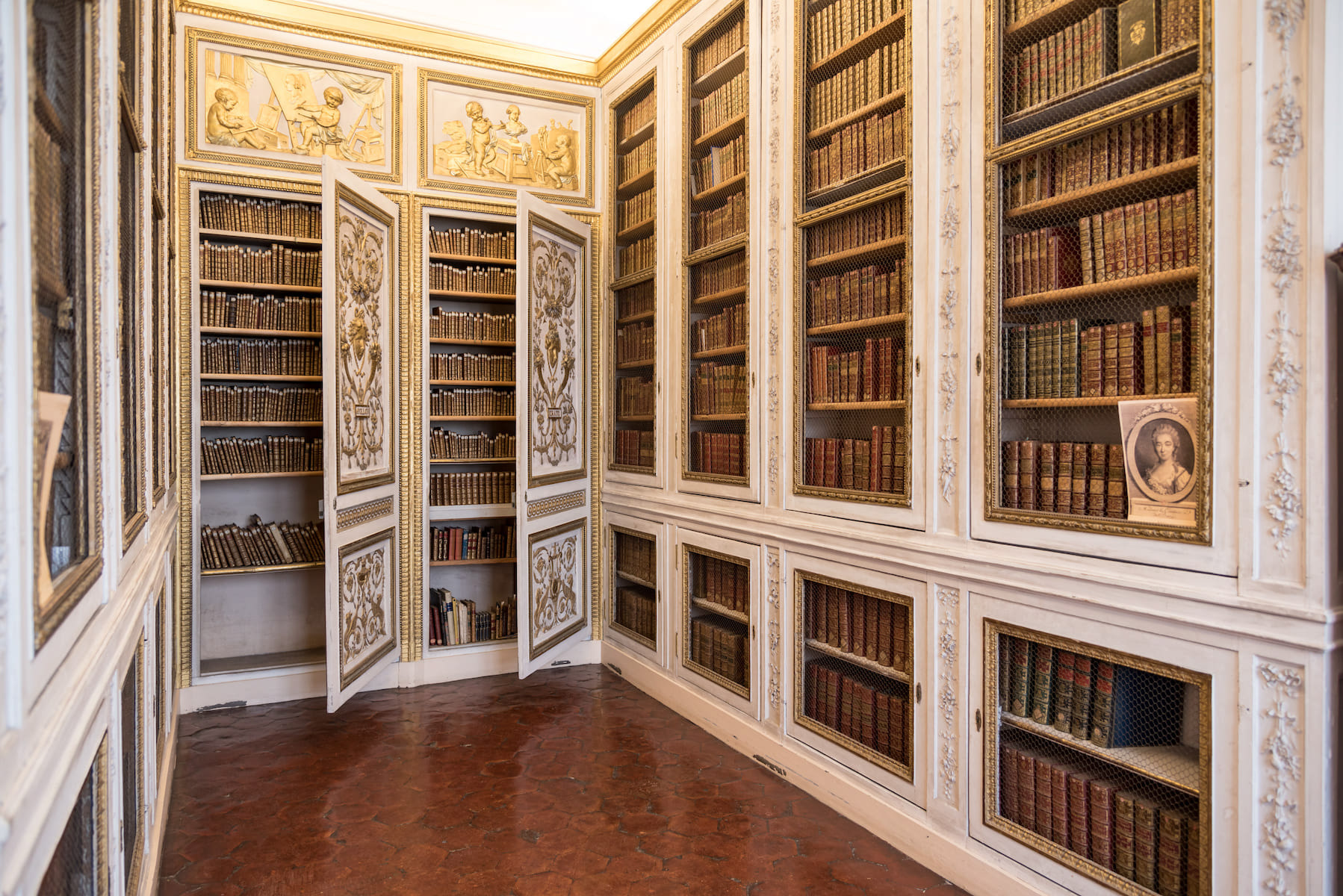 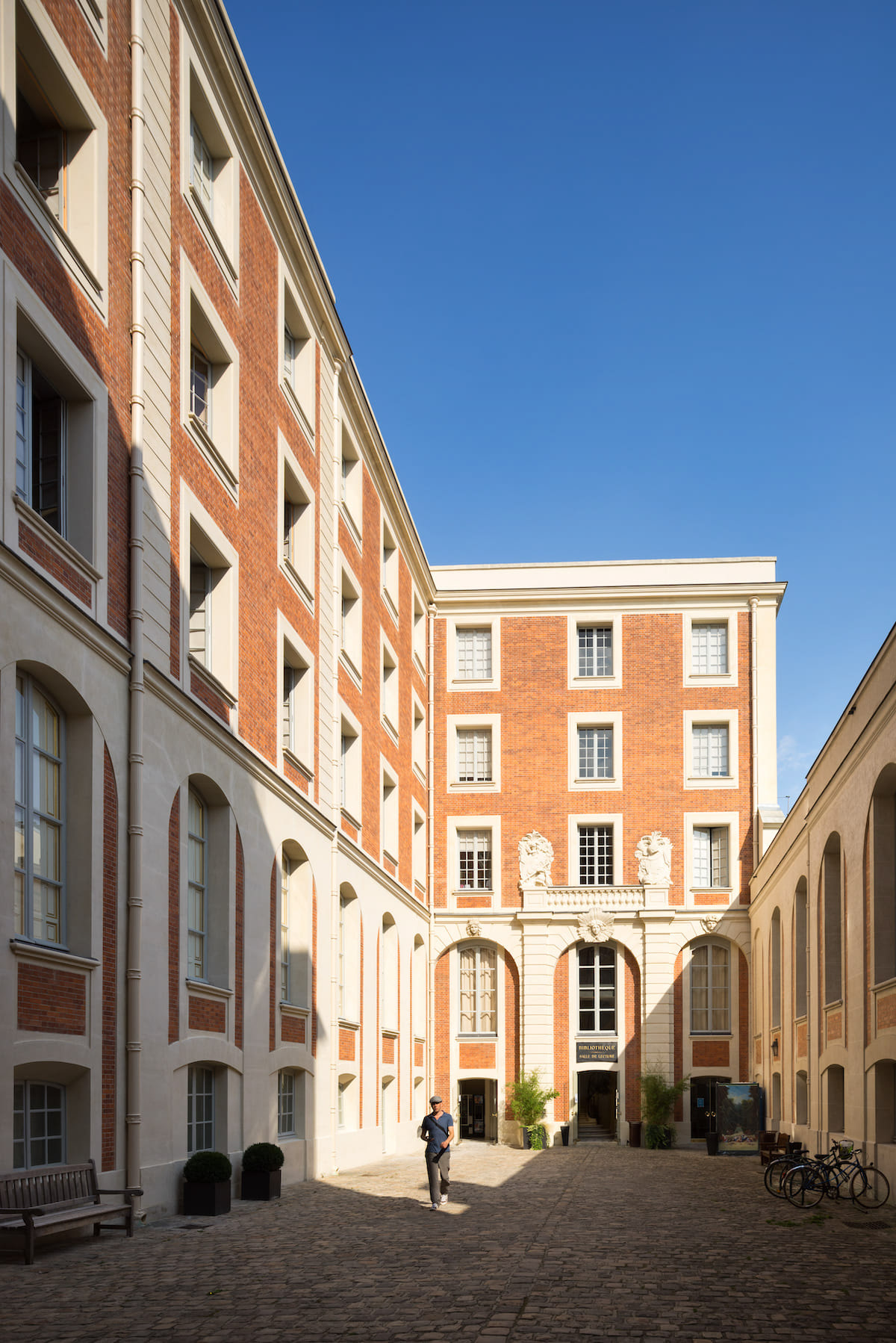 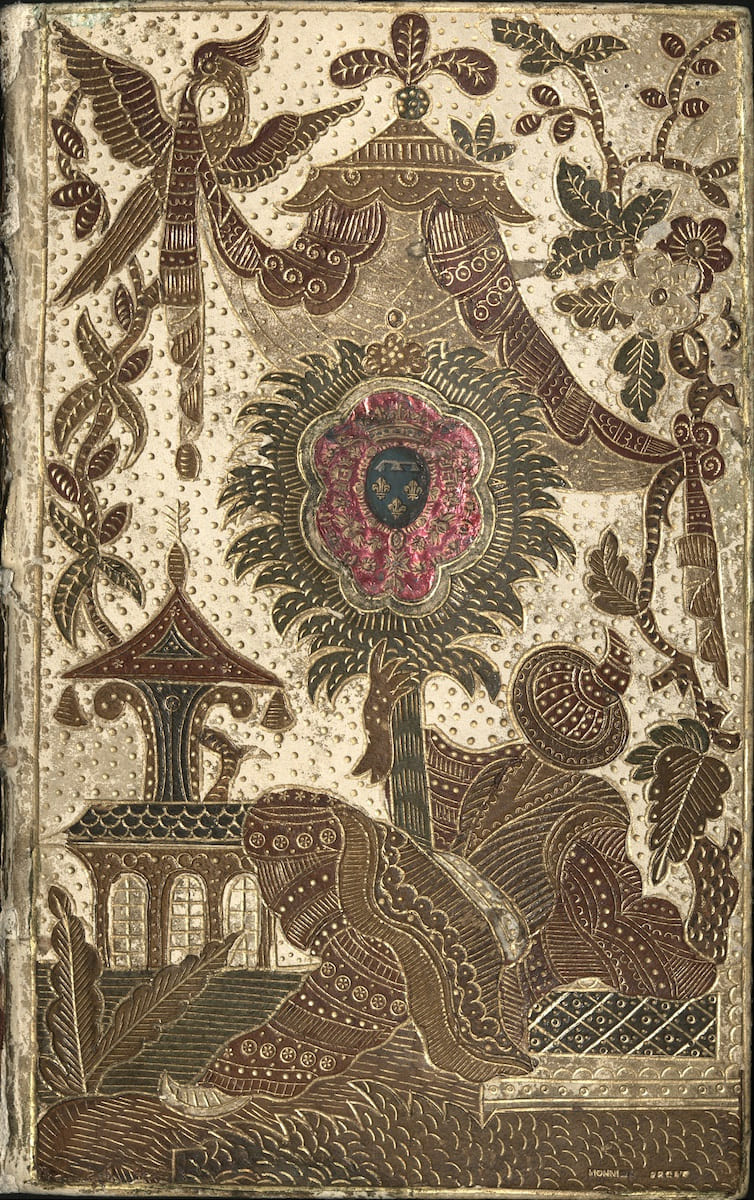 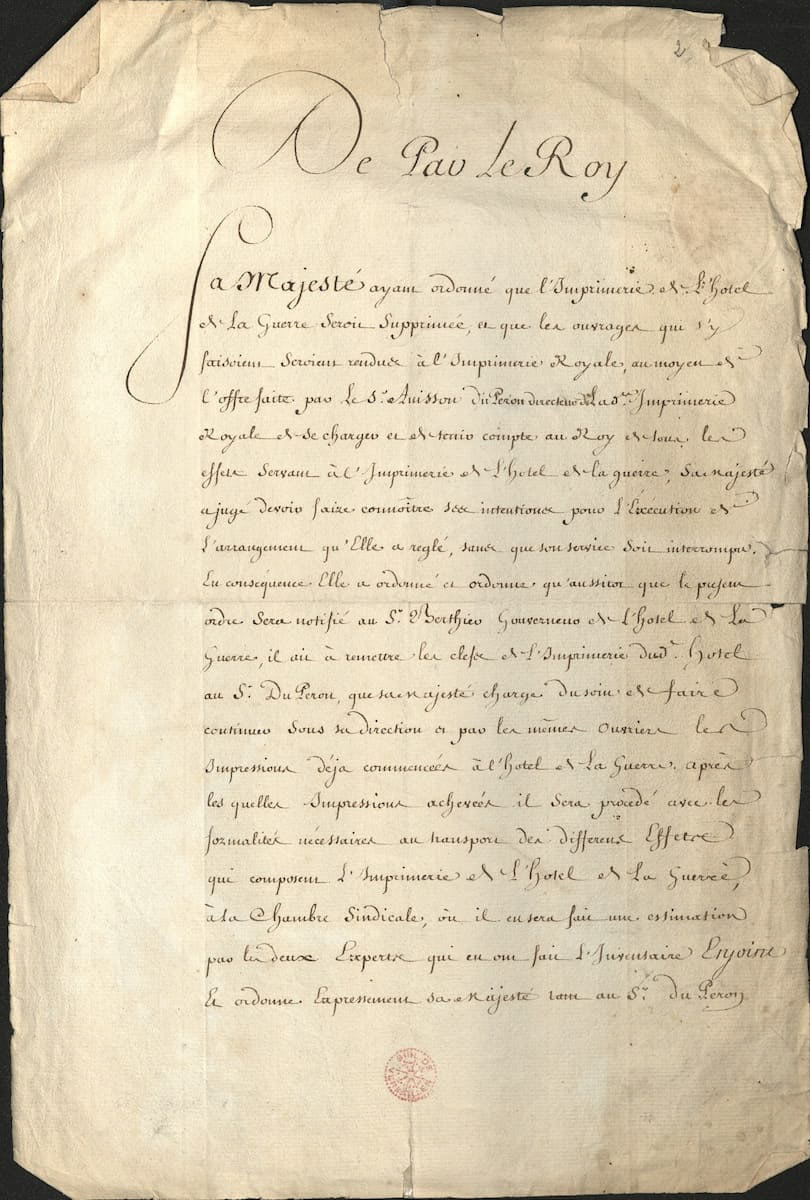 The only school to offer a full programme in the arts and crafts of the book,  the section "Centre des Arts du livre" welcomes book collectors, young future professionals, and established professionals who wish to improve their skills.
Classes offered  cover the entire range of  needs in:
●  Binding
●  Book decoration
●  Gilding and mosaic
●  Book restoration
●  Restoration of graphic art
●  Restoration of paintings
The school's objective is to promote the know-how of the arts and crafts of the book, to
preserve traditions while allowing them to evolve, and to contribute to the development of work opportunities.
www.aaav.asso.fr
aaav@wanadoo.fr
01 39 52 85 90
Instagram : @aaav.cal
A Bindery at the heart of the Fair

For the  duration of the Fair, the "Centre des Arts du livre" will animate workshops in  binding, gilding, book restoration and graphic arts restoration.
Activities will take place continuously, as in a real bindery, with demonstrations of the various steps required to bind a book. Visitors will be totally immersed in a workshop where the gestures and tools accompany the hand's intelligence/complicity.
Une immersion totale dans un atelier où les gestes et les matériaux accompagneront l’intelligence de la main.
The workshop team will answer all your questions.
Several books will be bound during the Fair - all the steps of leather and paper bindings will be detailed, and accompanied by decoration of the books.
Book restoration and restoration of graphic art material will also be part of the life of this workshop.
At 4 p.m. every day, one of the workshop teachers will give a demonstration highlighting a specific technique. 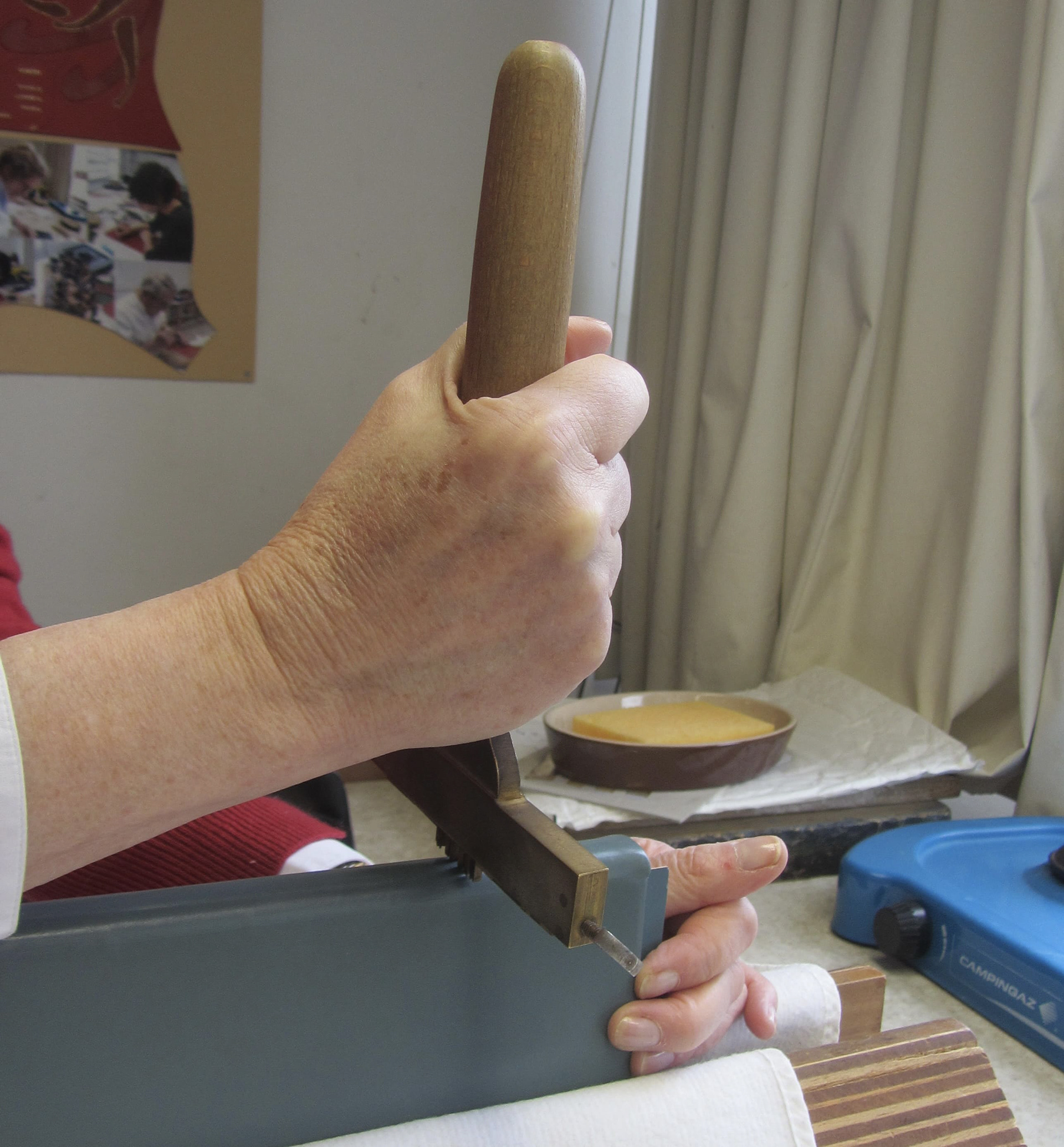 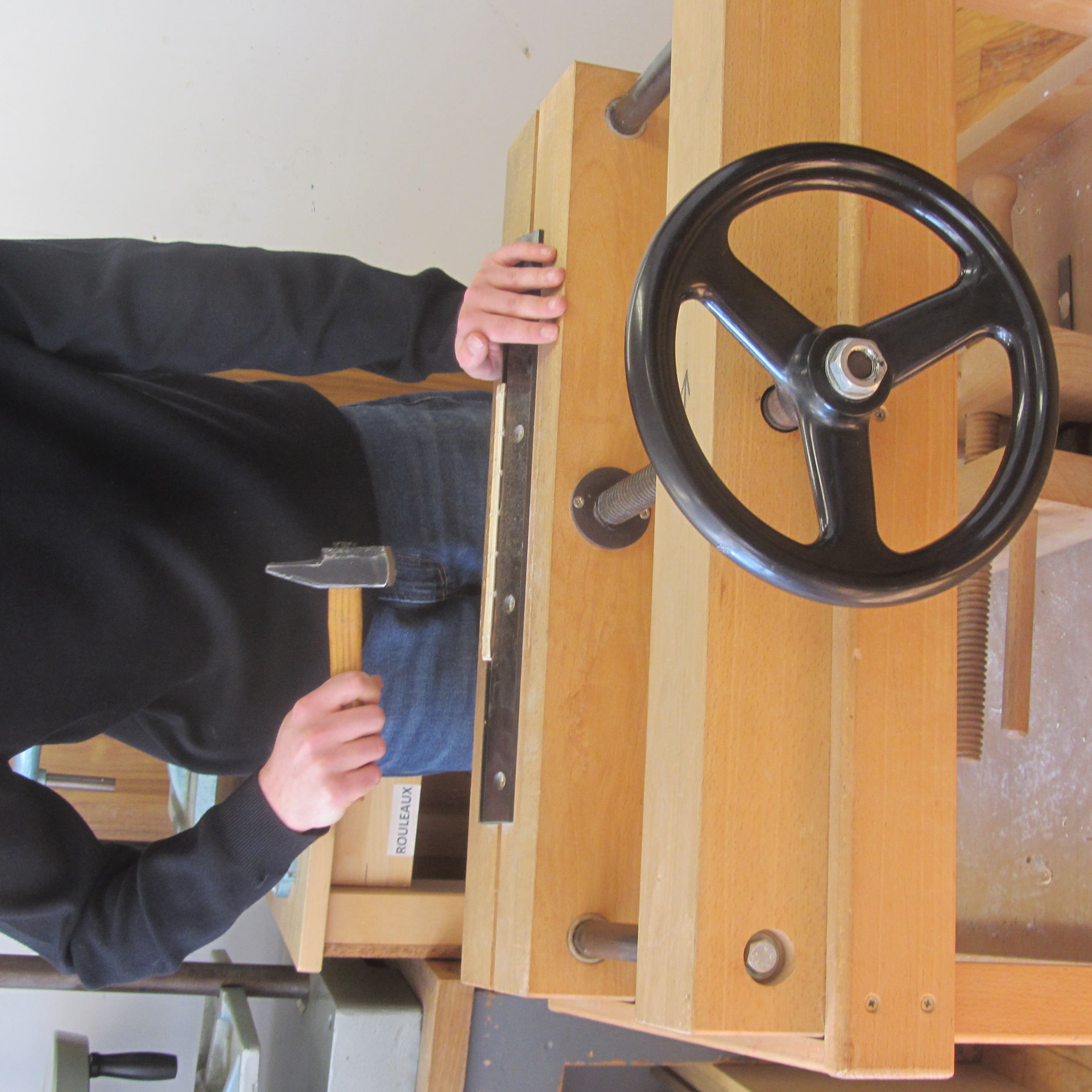 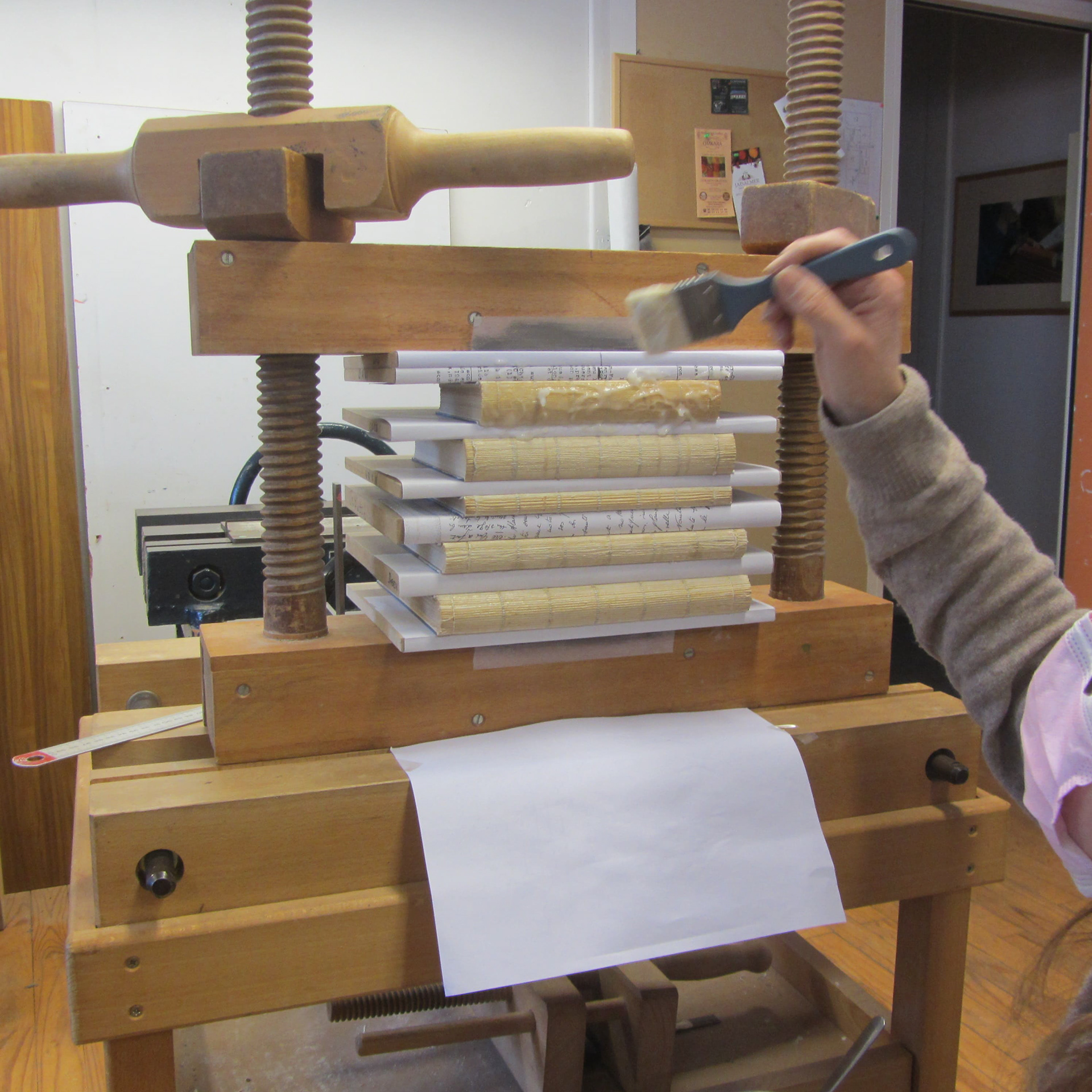 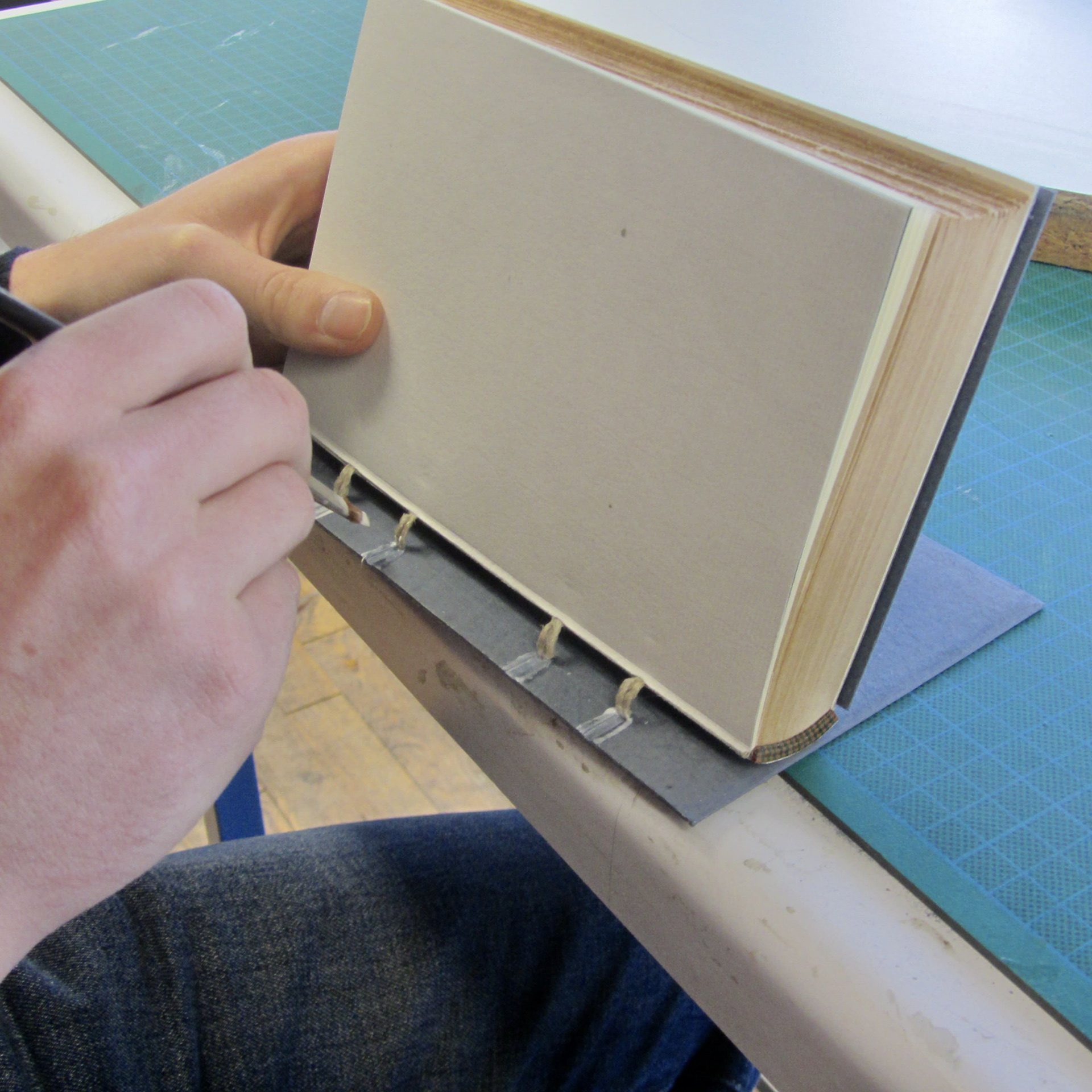 Exhibition: 10 years of binding competitions at the Vesinet Studio of Applied Arts
Discover or re-discover the prize winning bindings for the ten years since 2013: about sixty bindings  will be displayed on our stand, as well as those for the 2022 edition.
This competition is always a new adventure for us; for the first time we wish to share it with the maximum number of people, and the competition will be open to all binders wishing to participate.
For this special anniversary we needed a special author, and who better than Marcel Proust, who died one hundred years ago, on 18th November 1922! More than an anniversary, this is a hommage we propose through a few quotations on the theme of litterature, accompanied by Brigitte Chardome's calligraphy and engravings.
Florent Rousseau
Président de l’AAAV 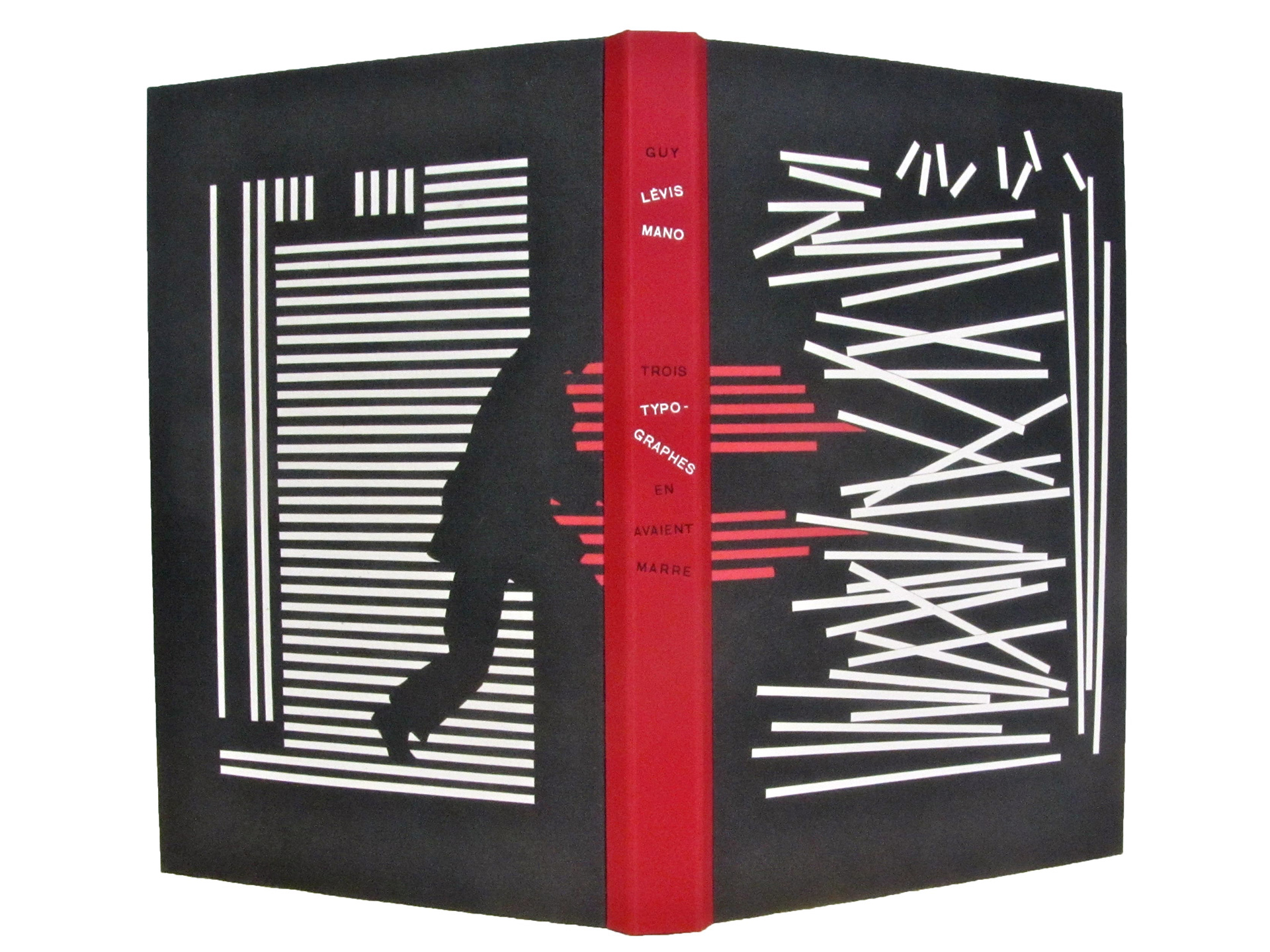 2014 Competition: "Three typographers were fed up", by Guy Lévis Mano. The prize for training courses and previous students was awarded to Elisabeth Champomier. 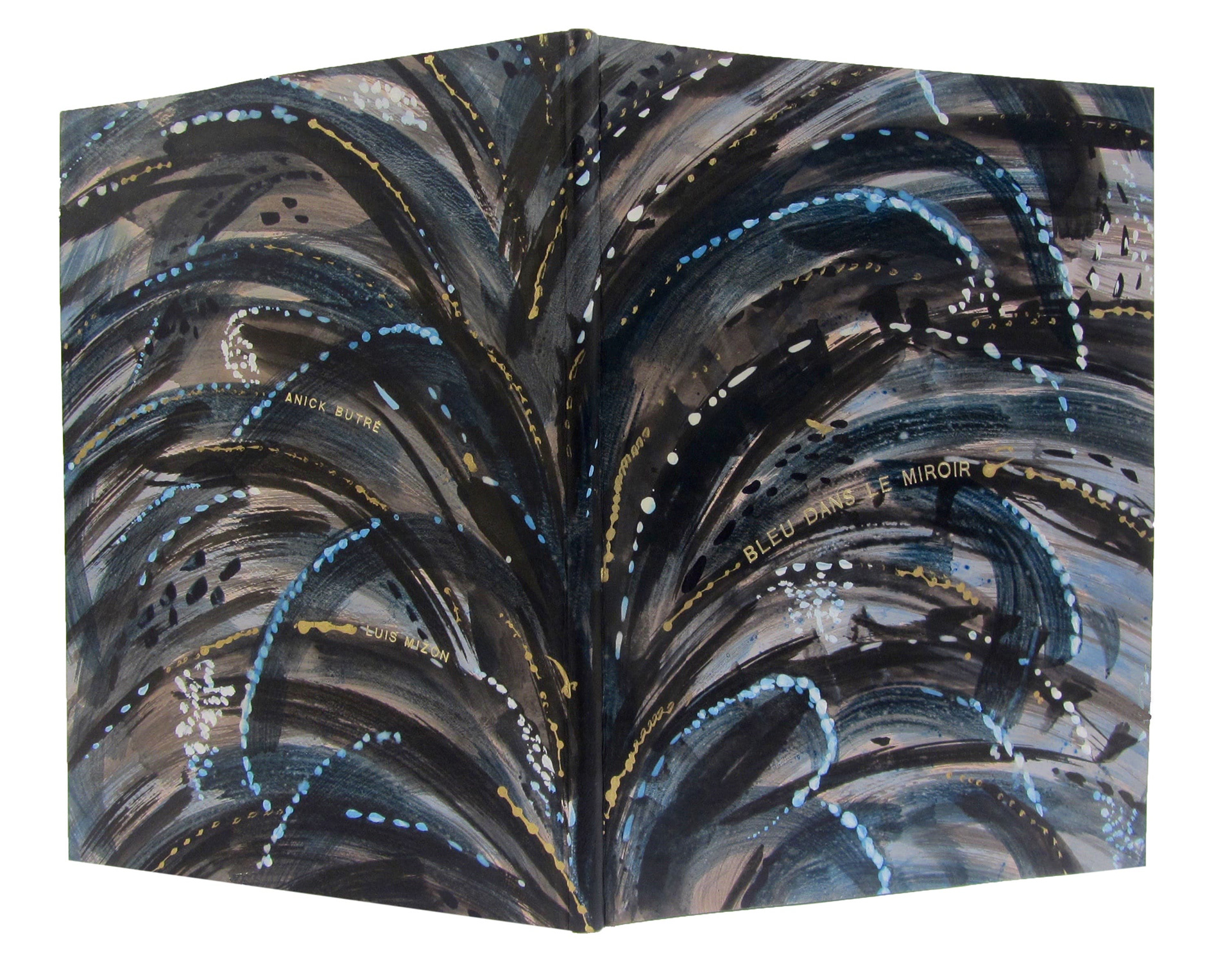 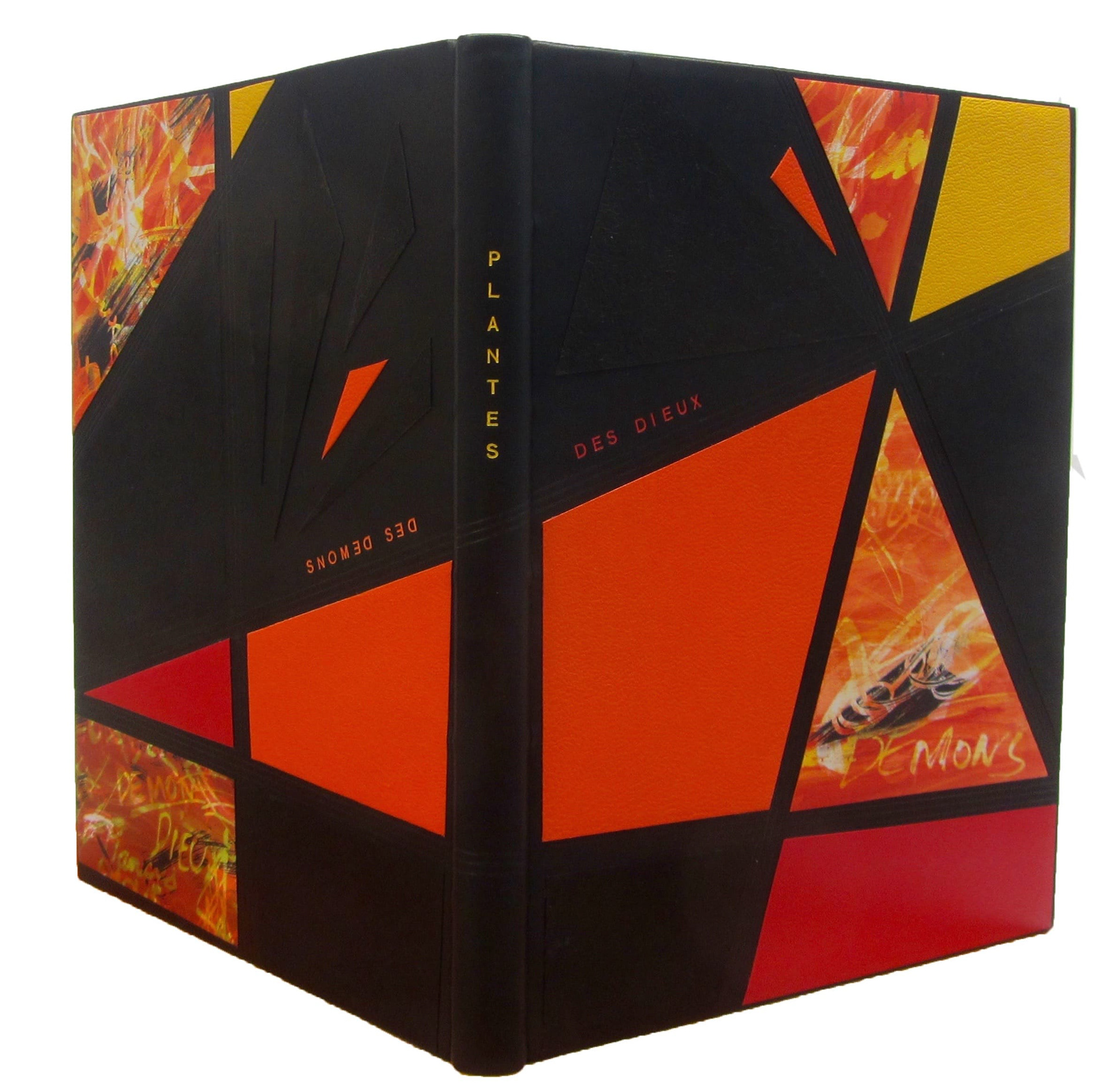 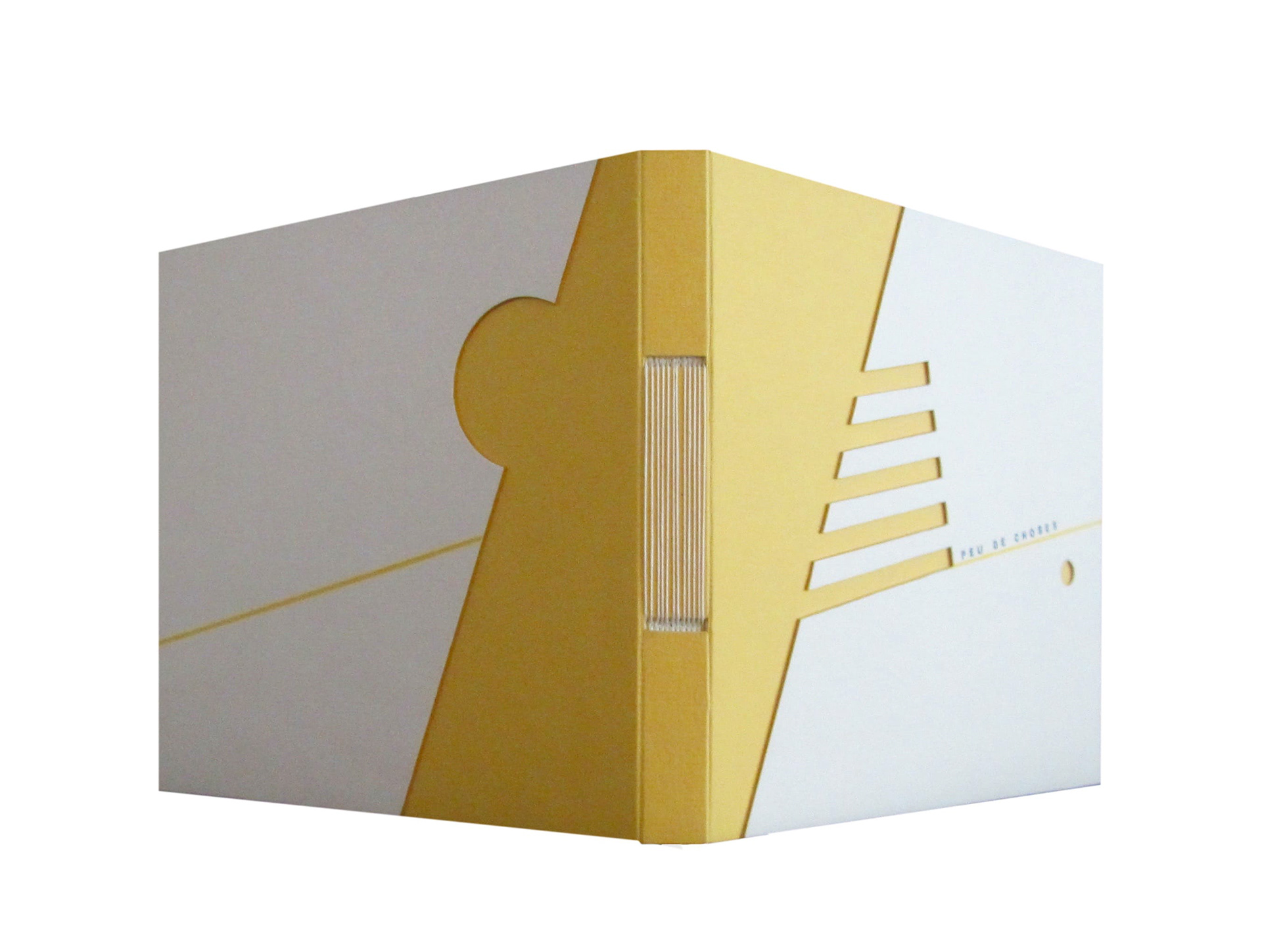 ❦
The Art Book and Print Workshop - Imprimerie nationale
H19 - i22, Eiffel wing
A lively and modern workshop
The Art Book and Print Workshop of the Imprimerie Nationale is a living workshop which, in the purest tradition of five centuries of French excellence, continues to print books with contemporary artists and authors. It is a living workshop whose modernity is expressed in, for example, the digitisation of historic typefaces and the creation of exclusive contemporary fonts to order.
A tradition of excellence for five centuries
The type designer, the punch engraver, the foundryman, the composers and letterpress printers and the cutter form an exceptional team that works daily on a unique fleet of machines and that maintains the treasure trove of punches, consisting of some 700,000 engraved pieces, most of which are classified as being of historical importance.
Made-to-measure
These masters and craftsmen are able to respond to any request from publishers, artists, gallery owners, bibliophiles, public institutions and private companies. The typesetters use the eight exclusive typefaces of the Imprimerie Nationale, Garamond or Romain de l'Université, Grandjean or Romain du Roi, Luce or Type poétique, Didot millimétrique, Marcellin-Legrand, Jaugeon, Gauthier and the latest typeface designed and produced by Franck Jalleau in 2018: Salamandre. They also have the largest collection of oriental characters in the world, allowing them to compose in more than 65 scripts, each in several styles: hieroglyphs, Coptic, Chinese, Ninevite, Aramaic, Hebrew, Arabic (12 styles), Samaritan, Siamese, Brâhmî, Syriac, Tifinagh...
The art book at the Imprimerie Nationale
The Imprimerie Nationale has always printed bibliophilic editions, since it began in 1538 under Francis I: this explains the salamander (the king’s personal emblem) proudly displayed on the company's logo. The very first painter's book was printed on its presses in 1900. There are countless renowned artists whose books have been printed or published by the Imprimerie Nationale, from Pierre Bonnard to Miquel Barceló. Several of these artist's books are still available, as are deluxe editions published in the collections "Lettres françaises", "La Salamandre" or "Acteurs de l'Histoire".
A historical library
With 35,000 volumes dating from the 16th century to the present day, the Imprimerie Nationale's historical library includes, in addition to the productions of the State-owned establishment, specialised collections on the graphic arts, bibliophily, oriental erudition, travel, natural history, etc.
Demonstrations of type casting and typographic composition will be given during the exhibition on Friday, Saturday and Sunday between 2 pm and 6 pm.
For any information and for orders, please contact:
Atelier du Livre d'art & de l'Estampe
104, avenue du Président-Kennedy
75016 Paris, France
atelierdulivre.in@imprimerienationale.fr
atelier-du-livre-art-imprimerienationale.fr

Le Cantique des oiseaux, by Farïd Od-Dïn 'Attâr, seven 12th century poems in Persian and French (translation by Leili Anvar) composed in Dabi (a typeface specially created for this book after Avicenna's Arabic) and in Luce, accompanied by seven compositions by Sylvie Abélanet, engraved in intaglio and printed by the Art Book workshop. With quotations from François Cheng and Saint Francis of Assisi. For this work, published and produced in its entirety by the Art Book Workshop of the Imprimerie Nationale in 2019, the artist received the Prix Jean Lurçat awarded by the Académie des Beaux-Arts and the Institut de France.

❦
The Cultural Association of the Bouquinistes of Paris
Stand F24, Suffren wing

It was in the middle of the 16th century, on the banks of the Seine below the Latin Quarter and the Parisian universities, that the first bouquinistes appeared. They were called colporteurs, because they kept their goods in a wicker basket worn (porté) around their neck (col). These included second-hand printed books. Gutenberg was not yet in the distant past and as book production continued to grow, a market for the resale of second-hand books was established and developed. This was ecological recycling before its time... Unlike their counterparts outside the capital who travelled all over France, the Parisian colporteurs were sedentary in this new market. They consolidated their presence in the heart of the city with the completion of the Pont Neuf and from then on were called "estaleurs, poor booksellers who, not having the means to run a shop or sell new books, lay out worn and crumpled old books on the Pont Neuf and its surroundings" (Richelet), until the appearance of the term "bouquiniste" in Trévoux's dictionary in 1752. The principle of the fabulous open-air bookshops we know today was established. Their number grew over the years alongside the development of the riverbanks up until the end of the 19th century, when they numbered around 220 booksellers. Today there are 230 of them keeping these unique bookshops alive, with a total of 239 concessions.

To celebrate our tenth year at the International Rare Book Fair, we have decided to present a selection of works from a project unlike anything else in our four-hundred-and-fifty-year history: a photographic portrait of the bouquiniste community. Initiated in the summer of 2021, it is the result of a collaboration between the Cultural Association of the Bouquinistes of Paris and the photographer Alain Cornu, who is carrying out this ambitious project. The aim is to create a portrait of the booksellers at a given point in time, in this case over the period 2021-2022.
This artist's view of a profession whose future remains uncertain in the face of societal change, owing, among other things, to new technologies, constitutes an exceptional and unique testimony to our community. This year, we are presenting a selection of one hundred of these portraits for your consideration.
Alain Cornu has lived and worked in Paris since his studies at Gobelins (l'École de l'Image), from which he graduated in 1988. In addition to his studio work of portraits and still life, he has been travelling around France with his camera for over twenty years. His series of images "Signs of the Forest" won several awards and has been added to the collections of the Bibliothèque Nationale de France and the Fonds National d'Art Contemporain. But it is Paris that has really held his attention since 2010. His nocturnal work on Parisian rooftops is the subject of several exhibitions and a book published in 2016. His important work on the emblematic guild of book dealers on the Paris quays began in 2021 and should, once completed, be published as a book. 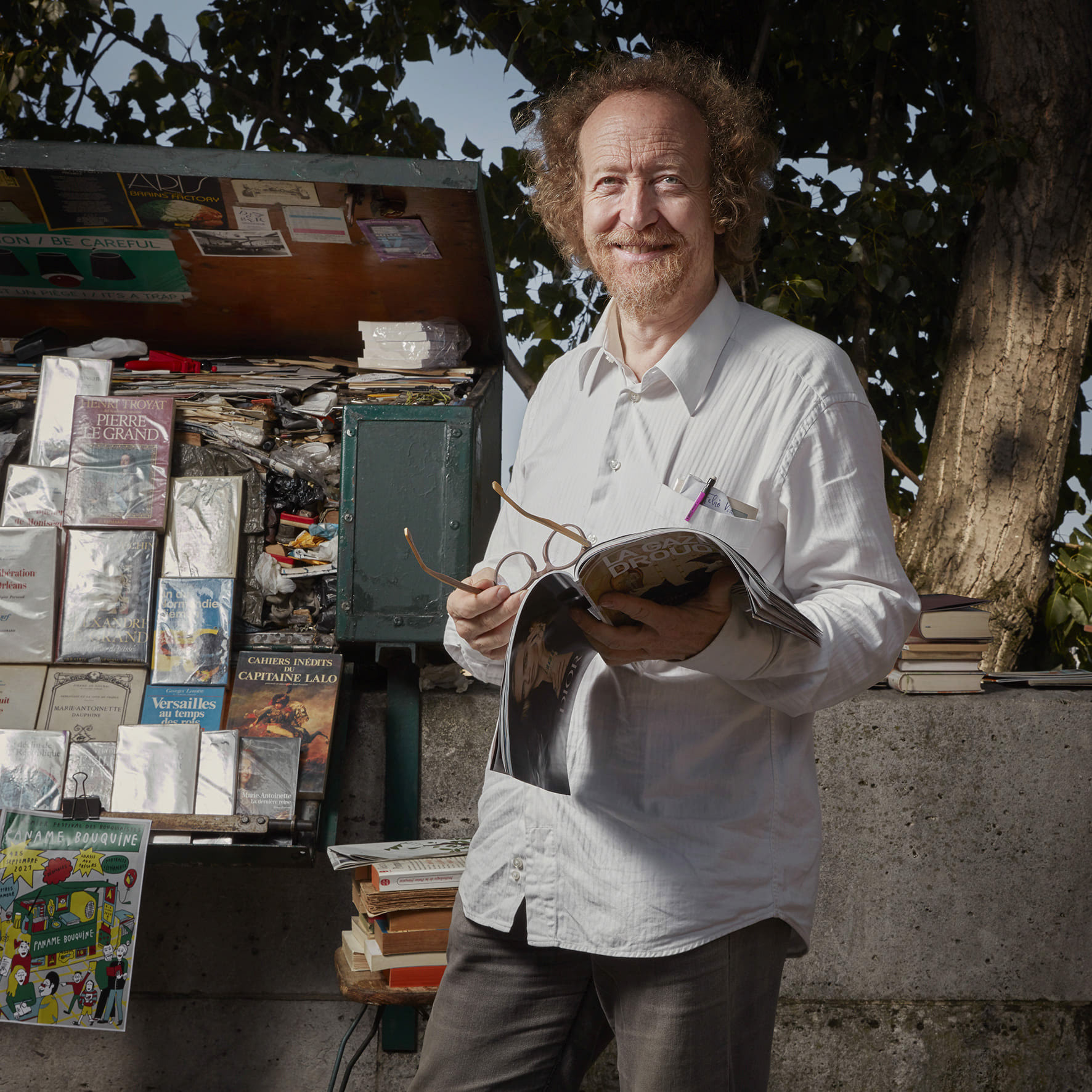 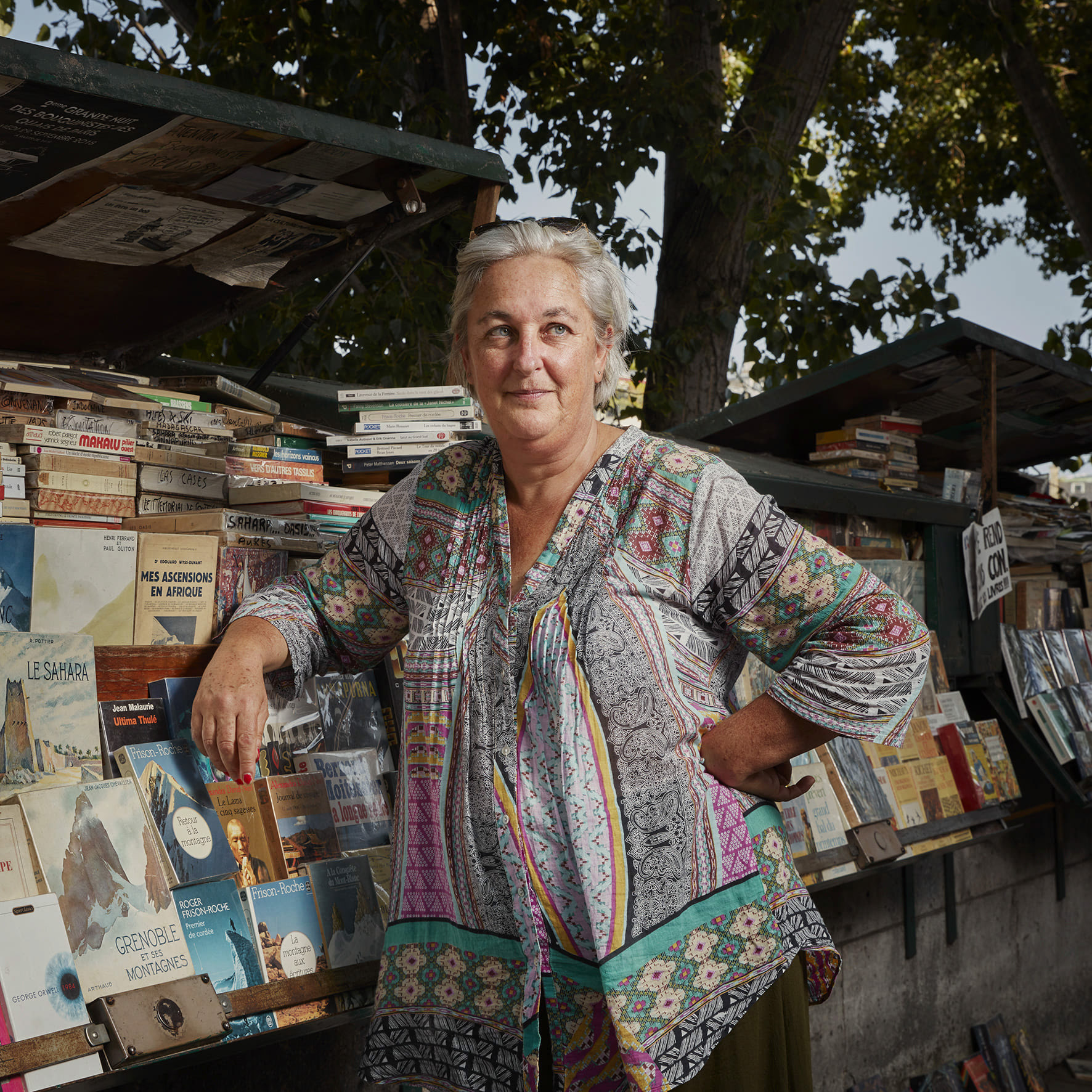 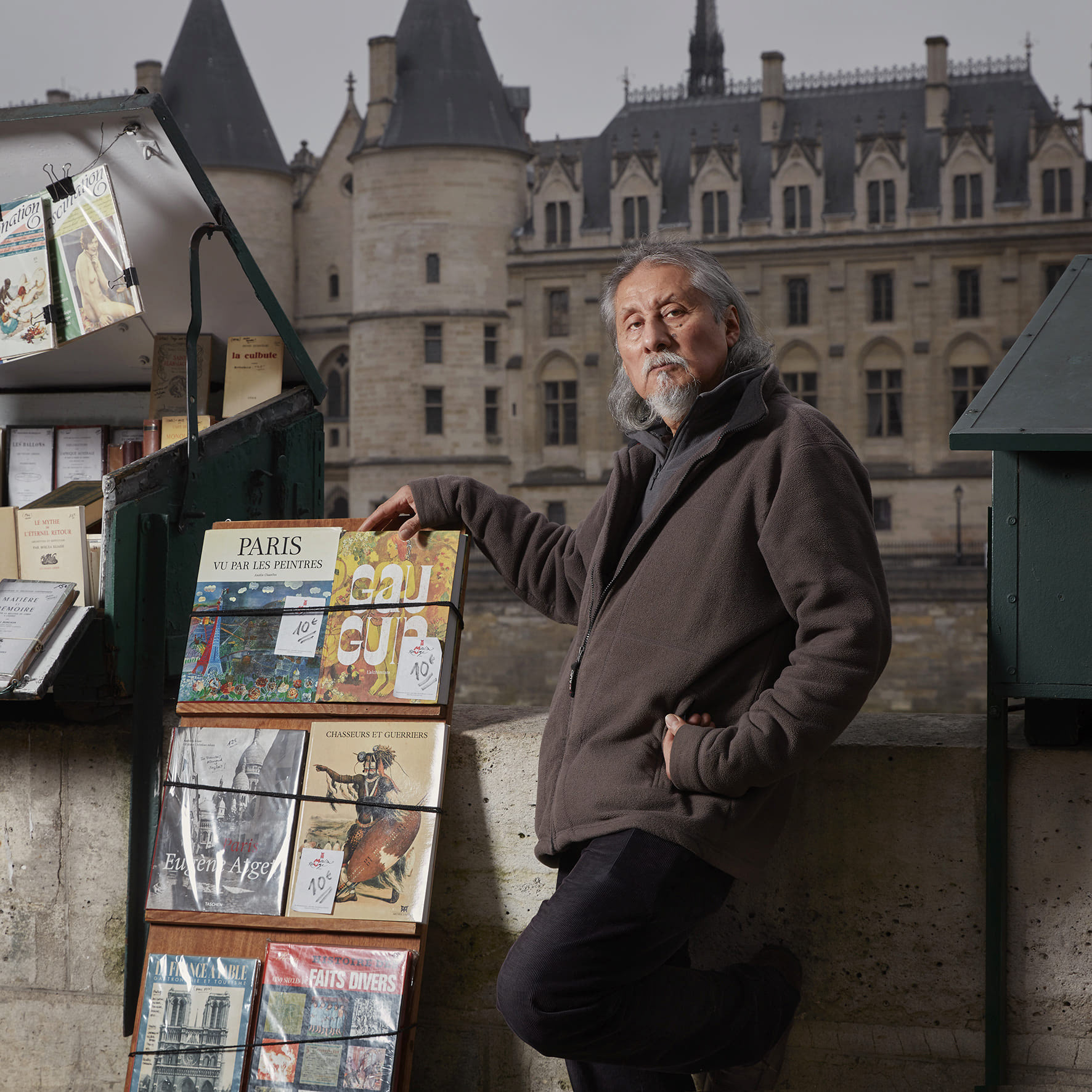 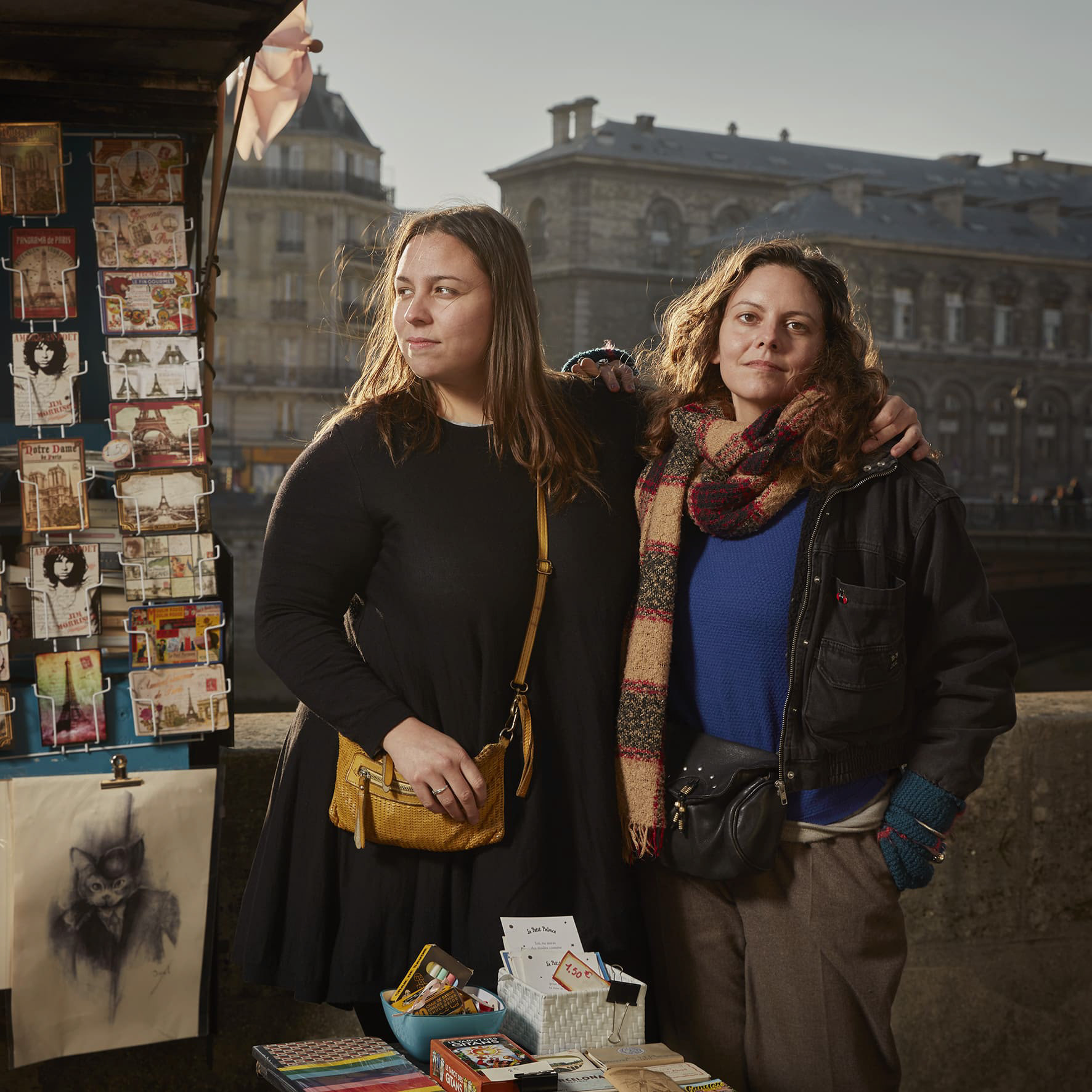